Java's and Groovy's King at Versailles 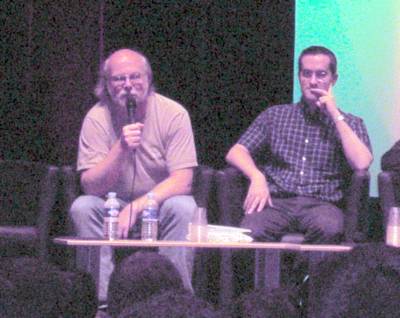 A few weeks ago at JavaDay 2006, a nice one-day conference organized by Sun, I've had the pleasure to meet James Gosling. James is the main creator of Java, and as I'm leading the Groovy project, and that the conference was happening in Versailles, city of the former French kings reknown castle, it's like two language kings were meeting there!

The picture taken on the left is from Chris, my friend and former colleague. Read his blog, it's full of great content! Of course, you'll have recognized James on the left, and me on the right... and not the reverse order ;-)

Overall, JavaDay was a nice conference, and I've had the opportunity to be speaking at two panels, one with James Gosling about our feedback from JavaOne 2006, and the othere on the French vitality in the Open Source area by being a member of the OSS-GTPassociation gathering French commiters and contributors to key OSS projects.

One of my favorite moment was when James Gosling told me that he had used Groovy on a couple of projects and that he liked it very much! What a delight and a pleasure to hear him saying that of my pet project, the project I've been working on on my spare time for years now!

Update: Someone else took a better picture of Gosling and myself.
In categories: Conference Geek Groovy
Categories
Resources
About