During Apple's WWDC conference was announced a new programming language, called Swift, targeted at developing on iOS devices (and likely Mac OS X in the future as well).
When looking through the slides from the keynote, online documentation, and iTunes ebook, an acquainted Groovy eye would immediately notice the inspiration the Swift designers took from Groovy.
In one of the slides covering Swift, Groovy was even mentioned as one of the languages clearly making developers much more productive, although I disagree with the placement of Groovy in terms of performance as Groovy should clearly be leading the pack of the bottom right hand quadrant. 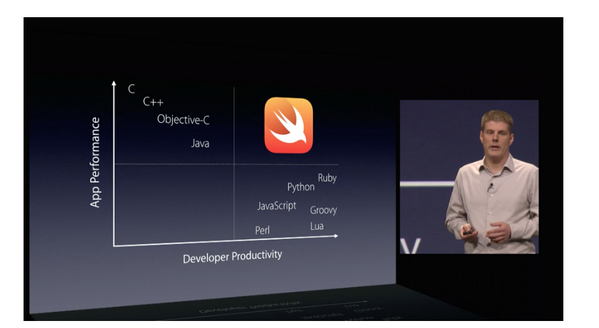 Swift is clearly a blend of various good things from many existing languages:
But Swift clearly took inspiration from Groovy on the following aspects.
Groovy and Swift (as well as other scripting languages) do have that concept of script, where free-standing statements don't need to be bundled into some kind of class structure, making scripting languages nice for the REPL feedback loop.
The syntax for lists and maps is the same in Swift and Groovy, with a comma-separated list of values surrounded by square brackets for lists, and key:value pairs comma-separated and surrounded again by square brackets for creating maps. The empty map is also the same with the [:] syntax.
The sole difference here is actually the fact Groovy's using "def" instead of "var". But a nice aspect of Swift is that it's got a "let" keyword for defining constants. You can use "final" in Groovy but it's not enforced by the compiler (yet).
Swift closures also adopt the same syntax as Groovy for its curly braces delimiters, but is using an "in" keyword to replace Groovy's arrow separating parameters from closure's body.
Here's what an example of Swift closure looks like compared to Groovy:
But there's also a shorter variant for both languages, with Swift's positional closure parameters, versus Groovy's "it" pseudo-keyword:
Swift also adopted Groovy's syntactic rule that if a closure is the last parameter of a function or method, you can actually put that last parameter outside the parentheses like so:
Another interesting aspect is named parameters. For instance, for instantiating objects:
Swift has a @lazy annotation similar to Groovy's @Lazy code transformation, to lazily instantiate complex fields only when they are first accessed:
Alongside its nullable types à la Ceylon, Swift adopted the safe navigation operator of Groovy (the next version of C# is going to support that Groovy notation as well):
Swift is brand new, and I haven't had much time to dive deeper yet, but it sounds like a nice and elegant language, and right out of the box, it makes me feel at home thanks to its resemblance with Groovy! It even makes me want to write Swift applications for some iOS device!
In categories: Groovy
Categories
Resources
About